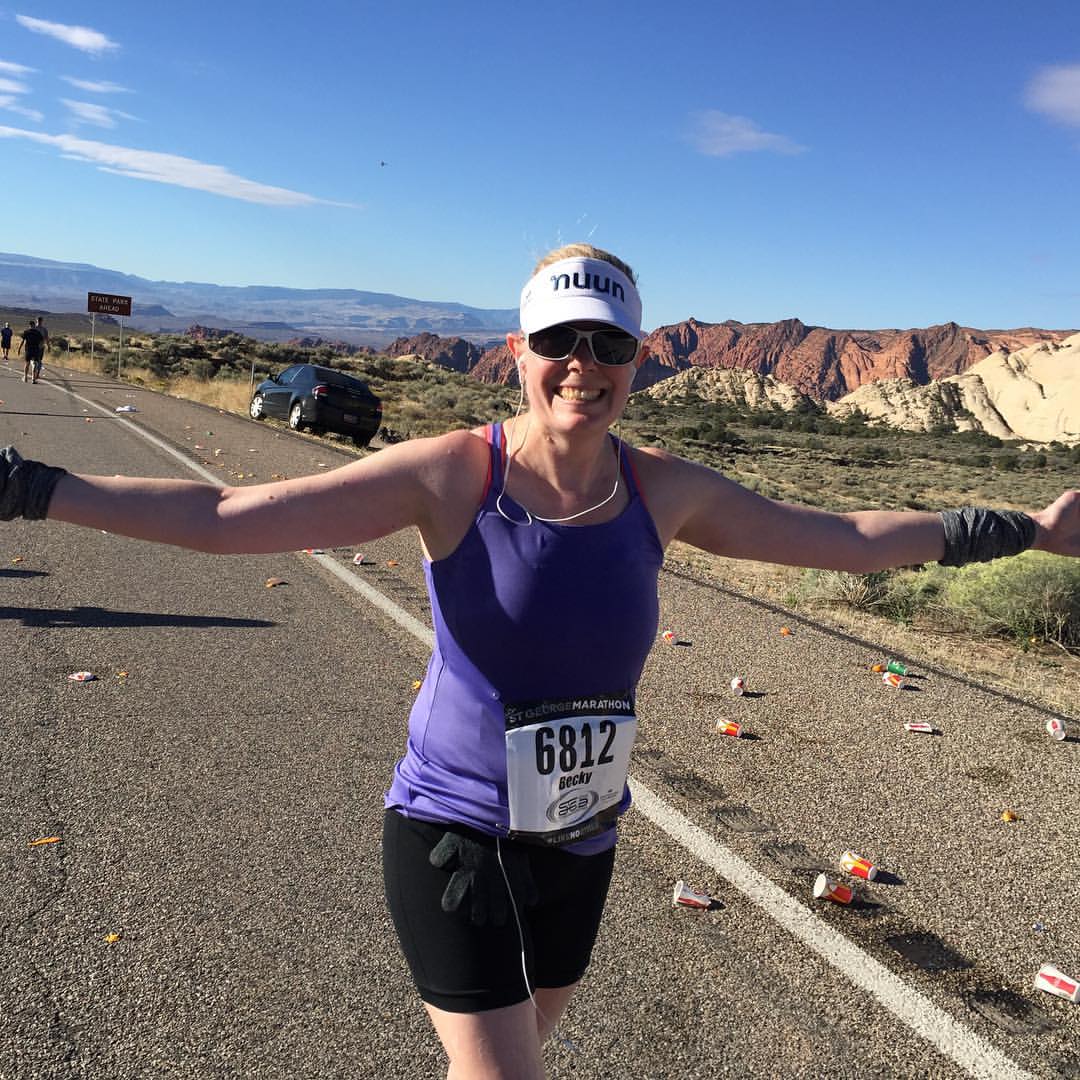 Running can be intimidating, especially running long distance races like a marathon or half marathon. But it doesn’t take a super human to accomplish these fetes. Regular people like you and me prove time and again that persistence and dedication can take you pretty far in training and running a race. Becky Craig embodies all of this. She is a mother, works a full time job, creates delicious confectionary treats at Sugar Shenanigans, and still finds time to train and run in some pretty prestigious races like her most recent journey to St. Georges Marathon. Becky is a fellow Oiselle Voilee runners and has graciously agreed to be the first spotlight in the new Runner Like You series. Each month Run Oklahoma highlights runners like you and me that find time to dedicate to this sport that intrigues, mystifies, and at times eludes each of us.

Without further ado, I introduce a Runner Like You, Becky Craig.

RO: When did you start running?

BC: I had tried to run a few 5ks in my early 30s but it wasn’t until I turned 35 and decided to sign up to train for my first sprint tri that I actually started running regularly. Although it took probably a year before I had any kind of consistency.

RO: Do you remember the first moment you felt “like a runner”?

BC: Maybe when I got my first Garmin. It was a Christmas gift after I ran my first half in Tulsa at the Route 66 in 2010. I remember thinking, now I have this new watch, guess that means I have to start running.

RO: You just finished the St. George Marathon. That particular race was included in Runner’s World 10 Most Scenic Marathons and was voted in the Top 20 Marathons in the USA. Can you share about your experience running in this race?

BC: St. George was definitely beautiful, but in my opinion, the course is no joke. Sure they say it’s downhill, but there are some serious uphill spots and downhill isn’t always easy I had a great race for 17 miles, I felt good and like I was on track to run a good race. After that, sharp pain in my leg prevented me from running at all. It was a long 9 miles to the finish line.

BC: Well, I have an MRI scheduled for Monday afternoon and I am currently limping around in a boot. I am hoping it’s not a tibial stress fracture, but I will have to wait until next week to find out what’s going on. I have plans to run the half at the Route 66, I have done it every year since 2010, but I will have to see what my doctor says.

BC: The coolest race I have ever done is the Ragnar Colorado. Probably the hardest running I have had to do, mostly on account of the whole lack of oxygen, but this was the most fun race I’ve ever done. Driving around in a van with five other runners in the middle of the night is seriously fun.

RO: If you could deliver one message to fellow runners like you, what would it be?

BC: Everyone has bad days, we just have to keep moving forward. It doesn’t matter how long it takes, because sometimes it will take a long time.

• Running with music: Yes or no?

Music only for races when I know I will be alone. Otherwise I prefer to run with friends and talk. Trust me, I can talk a lot during a six mile run.

NYC! I prefer a race that I could actually run some day! Lol.